In the months following Parse’s shutdown announcement, I was in school and was putting off the migration of my current Android app that utilized Parse. I didn’t want to have to host my own Parse server, but it was looking like that was my only option. However, in May, the solution arrived: Google’s Firebase service underwent a major upgrade.

Before even beginning with Parse, I had considered using Firebase as my backend-as-a-service provider. The problem was that my app requires file storage, which Firebase didn’t offer and Parse did. However, the new Firebase does have file storage, which allows me to easily download server-side data in my app.

Although server integration is essential to my app, the integration itself is not particularly complex or messy. That is, it wasn’t a problem to switch all the models and adapters to use Firebase instead of Parse. After a day of refactoring, I was completely out of Parse’s ecosystem and into Firebase’s.

Now, the key part about my app’s database is that the data is maintained by my client (an education group), not by me. The app is a platform for lesson plans, and my client manages the lesson files and information that gets uploaded to the server. As the content managers are not programmers, the familiar, spreadsheet-style Parse Dashboard was very useful for us. It was very intuitive to add new rows to the sheet to add a new lesson. 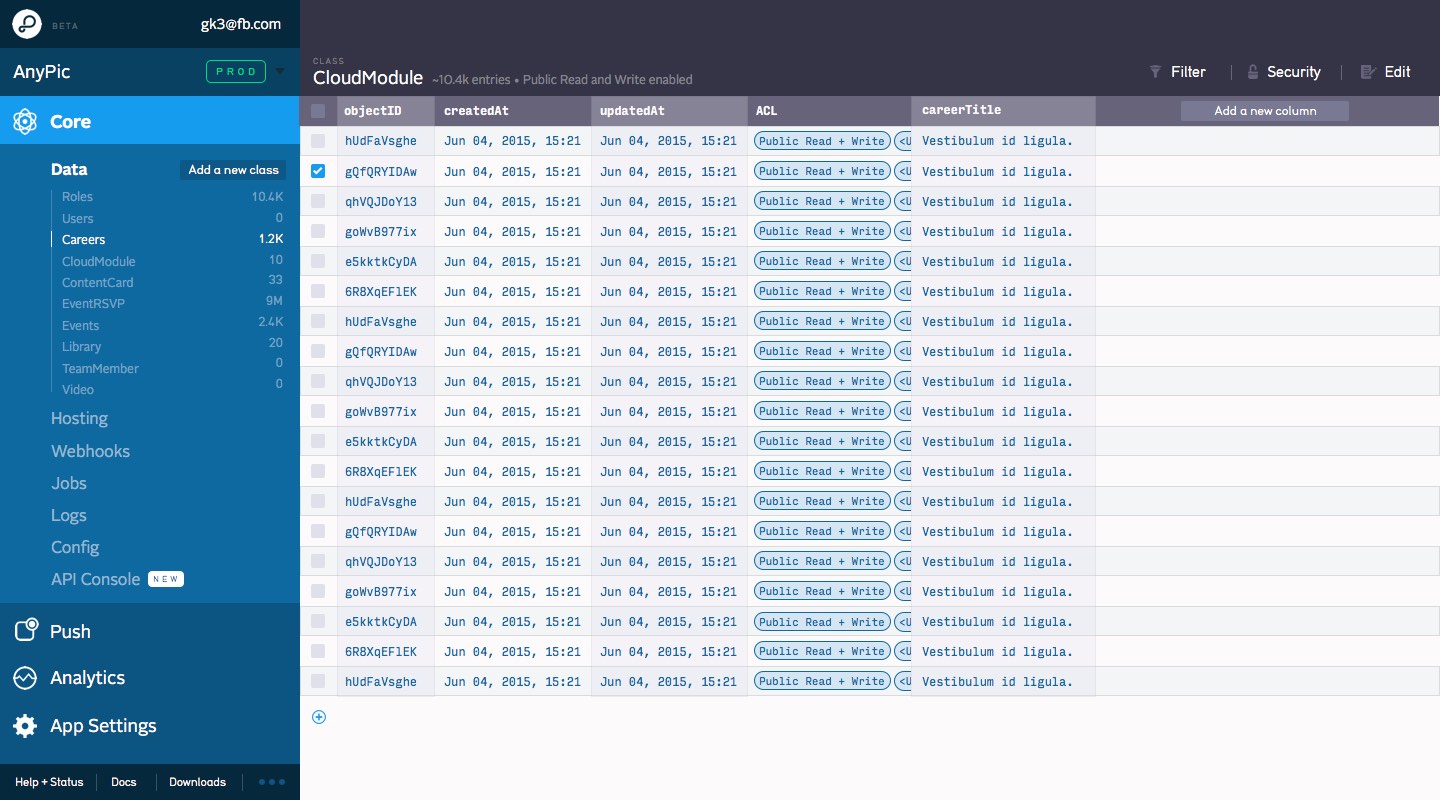 However, the interface for the Firebase database is much closer to writing pure JSON. Each entry has a parent-child hierarchy, and for each new entry, you must spell out both the key and the value. An entry in the database looks like this:

When someone else is maintaining the data, this parent-child format is more worrisome than the spreadsheet format. In the spreadsheet format, the developer can control the names of all the columns, (e.g. lessonName or subject) and be confident that queries to these columns’ name in code will not come up empty. However, with Firebase’s JSON format, there’s more room for error. A simple mistake while typing in the key of the entry could lead to a NullPointerException. For example, if you are adding 500 lessons to the database by hand, it’s not hard to imagine that on lesson 392, you might type subejct instead of subject for the Subject key. Now we’ve got an improperly formatted lesson in the app.

To make this easier for the client and to give me more confidence in the results my queries were returning, I set out to get that spreadsheet format back. To do this, I set up a Google Sheet that interfaces with Firebase using a Google Apps Script. Each time the spreadsheet is updated, its rows and columns get converted into a JSON object that is sent to Firebase.

From a Google Sheet, you can add a script that exports the data to a JSON format by opening the Script Editor in the Tools menu. In the script editor, open the Resources menu and click on Libraries to add the Firebase library. In the “Find a Library” bar, enter the key MYeP8ZEEt1ylVDxS7uyg9plDOcoke7-2l to find the Firebase library. Choose the latest stable version.

The function that converts the sheet to JSON will depend on the structure of your data, but there’s a simliar pattern to follow. First, you need to get an instance of your database. You can find the URL of your database at the top of the database page in Firebase, and you can find your database secret (or generate a new one) in the Database tab of Firebase’s Project Settings. Then, write a function in your Google Apps Script that looks like this:

Now, iterate through the sheet’s rows and store each column to a specific variable in the JSON object we’re outputting.

Finally, you need to add your new JSON object to your Firebase database. We’ll add it under the name Lesson. If an object already exists under Lesson, this will overwrite that object. However, since we’ll only be maintaining this object from the Google Sheet, we’re not worried about any data loss — any overwrites will simply be keeping Firebase up to date with the spreadsheet. To write the dataToImport JSON object to Firebase under the key Lesson, we’ll use the base variable we created earlier, like this:

Combining all this gives us this function:

With this new, more familiar interface set up, the database is ready to face the clients as a content management system with little risk of invalid data formatting (use Google Sheets’s data validation features to reduce that risk even further).